In a brief ceremony, Novice Benjamin Ziegler was clothed in the Benedictine habit at Saint Meinrad Archabbey on August 5, 2020. 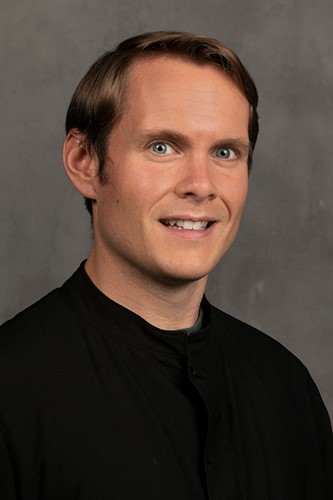 In a brief ceremony, Novice Benjamin Ziegler was clothed in the Benedictine habit at Saint Meinrad Archabbey, St. Meinrad, IN, on August 5, 2020. He now begins a year of monastic formation, including study of the Rule of St. Benedict and monastic history.

Novice Benjamin, 25, is a native of Pittsburgh, PA.

He earned a bachelor’s degree in mechanical engineering from the University of Dayton in 2018. He then worked as an engineer in energy and HVAC commissioning for Heapy Engineering in Cleveland, OH.

He is the son of Alan and Kathleen Ziegler of White Oak, PA, and attended Serra Catholic High School in McKeesport, PA. Most recently, his home parish was Mary, Mother of God Parish in White Oak.

As a novice, he takes a year off from formal studies and trades. The novitiate is a time of prayer and learning intended to help a novice discern his vocation as a monk.

At the end of this year, a novice may be permitted to profess temporary vows of obedience, fidelity to the monastic way of life and stability in the community of Saint Meinrad.

Two join Board of Overseers

COVID-19 Safety Plan for Seminary and School of Theology