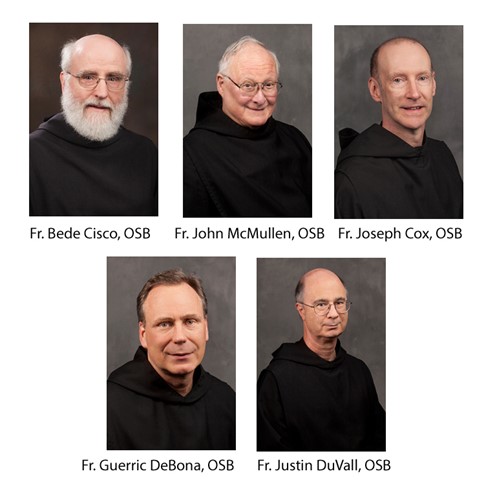 Fr. Bede succeeds Fr. John McMullen, OSB, who has served as prior since Archabbot Kurt was elected archabbot in June 2016. Fr. Bede has served in various capacities in Saint Meinrad Seminary and School of Theology, most recently as the director of the Spiritual Formation Program. He begins his work as prior on June 10. Fr. John also serves as an associate priest at St. Meinrad and St. Boniface parishes.

Fr. Joseph will succeed Fr. Guerric DeBona, OSB, who will assume the position of director of the Spiritual Formation Program. He also teaches in the Seminary and School of Theology and is the author of several books. Fr. Joseph Cox, OSB, takes over as subprior on June 1. He oversees technical services and cataloging in the Archabbey Library and is chaplain for the Benedictine Oblate Community.

Fr. Justin begins work as novice and junior master on June 1. He currently serves as the vice-rector of Bishop Simon Bruté College Seminary in Indianapolis, IN. Prior to that, he served as archabbot of Saint Meinrad from 2004 to 2016. Other assignments have included monastery prior and vice rector of the Seminary and School of Theology.