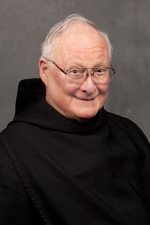 He studied at Saint Meinrad’s high school and college from 1955-60, completing college at Blue Cloud Abbey. He studied theology at St. Bede Abbey, Peru, IL, and was ordained a priest on May 29, 1966. He did graduate studies at The Catholic University of America from 1967-69. He holds a master’s degree in library science.

As a monk of Blue Cloud, he served in various assignments, including 40 years as the abbey librarian. He also served in area parishes and as the abbey treasurer. He served the Native Americans at St. Ann’s Indian Mission, Belcourt, ND, for three years. When Blue Cloud Abbey closed, Fr. John transferred to Saint Meinrad Archabbey in 2013.

Until this June, Fr. John had served as prior (second in leadership) in the monastery since 2016. He currently serves as an adjunct priest at St. Meinrad Parish in St. Meinrad and St. Boniface Parish in Fulda, IN, and as a commuting chaplain for Monastery Immaculate Conception in Ferdinand, IN. 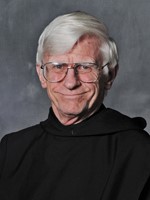 Br. Dominic was born in Delphos, OH, and joined the monastery after high school. He made his profession of vows on May 11, 1961.

Br. Dominic currently works as assistant to the house custos, infirmary assistant and at Abbey Caskets. Previously he served in the bakery, as head waiter and head cook in the Guest House, on the Archabbey farm, and assisting with the grounds, vineyard and wine cellar.

From 1981-85, he worked at Saint Meinrad’s priory in Huaraz, Peru. He also served in Guatemala from 1996-2003. Other assignments have included manager of the grounds, dining room refectorian and mail delivery. 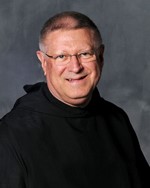 Fr. Warren is a native of Huntingburg, IN, coming to Saint Meinrad as a high school student in 1954. He completed high school, college and theology studies at Saint Meinrad. He joined the monastery in 1960 and made his first profession of vows on August 15, 1961. He was ordained a priest on May 1, 1966.

He also studied at the University of Notre Dame, earning a master’s in institutional administration in 1972. Fr. Warren served in a variety of assignments, including assistant business manager, purchasing agent, director of corporate services, director of alumni relations, and parish assistance.

He currently serves as the editor of the Ordo ​for the Swiss-American Benedictine Congregation. 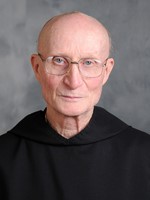 Since then, Br. Mario has served in several different positions, including as plumber, assistant librarian and shoe repairman. He currently works in Saint Meinrad’s Physical Facilities Department.

Fr. Meinrad grew up in Indianapolis, IN. He made his profession of vows on August 15, 1956, and was ordained a priest on May 7, 1961. He has a Master of Arts degree from Butler University, a Bachelor of Sacred Theology from The Catholic University of America, and a Master of Divinity from Saint Meinrad School of Theology. 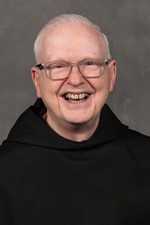 Following ordination, Fr. Meinrad taught at Saint Meinrad High School and College for 16 years. For the next seven years, he served as pastor at St. Meinrad Parish, St. Meinrad, IN, and St. Mary Parish, Huntingburg, IN.

In 1984, he began work in Saint Meinrad’s Development Office as an associate director and then as alumni director for nine years. He served as director of the Benedictine Oblate community from 1995-2017. He is the archivist for the Saint Meinrad Archives and for the archives of the Swiss-American Benedictine Congregation.