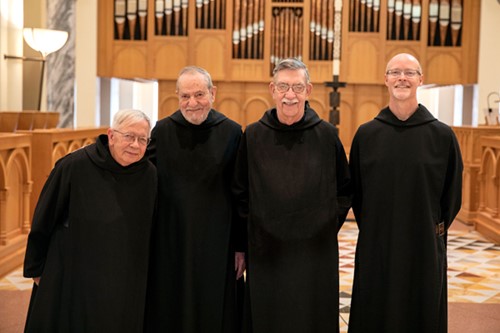 Fr. Adrian Burke celebrated his 25th anniversary of priesthood ordination. They were honored during Mass on Sunday, May 29.

He taught at the American College in Belgium from 1997 to 2008, as director of liturgy and professor of homiletics, and was vice rector there from 1997-99. When he retired, he was awarded the college’s first Archbishop Fulton Sheen Medal. He resides in the monastery infirmary.

Br. Maurus was born in Tiffin, OH, and professed his monastic vows on August 10, 1952. From 1951-58, Br. Maurus worked as an assistant in the Abbey Bakery. From 1958 to 1990, he assumed various roles at Abbey Press, including manager of the Printing Division, product development director and manager of the Abbey Press Gift Shop.

Since 1990, Br. Maurus has worked in various hospitality roles, as tour director, manager of the Guest House, guestmaster and retreat director. He has led numerous trips to Europe and the Holy Land. He is currently director of the retreat program and guestmaster.

Fr. Matthias is a native of Huntingburg, IN. He came to Saint Meinrad in 1955 to attend high school. He earned a bachelor’s degree in philosophy from Saint Meinrad College in 1964, a Master of Divinity from Saint Meinrad School of Theology in 1967, and licentiate and doctorate degrees in systematic theology at Sant’ Anselmo in Rome.

He joined the monastery in 1961, professing his vows as a Benedictine on August 15, 1962. He was ordained a priest on September 24, 1967. He taught theology at Saint Meinrad School of Theology from 1969 to 1981. The next year, he began an eight-year stint as professor of theology and director of the pre-theology program at Saint Meinrad College.

Other assignments have included director of the Summer Session Program, director of continuing education, and associate pastor and pastoral resource theologian for the Diocese of Nashville, TN. Currently, he serves as chaplain for Our Lady of Grace Monastery in Beech Grove, IN.

Br. Flavian is a native of Jasper, IN. After graduating from Ireland High School in 1960, he came to Saint Meinrad and entered the monastery in 1961. He took his monastic vows as a Benedictine monk on May 13, 1962.

He has served in various capacities at Saint Meinrad, including as an assistant plumber, monastery house prefect, mail and delivery driver, and caretaker for the monastery rock garden. He also is an artist specializing in woodburning creations.

Fr. Adrian came to Saint Meinrad in 1990 as a seminarian for the Archdiocese of Indianapolis. He entered the monastery as a novice in 1992 and professed his vows as a Benedictine monk in 1993. He professed his solemn vows in 1996.

Fr. Adrian earned a Master of Divinity degree from Saint Meinrad School of Theology in 1997 and was ordained to the priesthood on June 8, 1997. He also has a bachelor’s degree in marketing from Indiana University.

From 1997 to 2000, Fr. Adrian was associate pastor of three rural parishes in southern Indiana: St. Meinrad, St. Boniface in Fulda, and St. Martin in Siberia. He later completed graduate studies in spirituality at the Pontifical University of St. Thomas Aquinas in Rome, earning a license in sacred theology in 2003.

Fr. Adrian gives retreats at the Archabbey Guest House and Retreat Center as well as at parishes, dioceses and religious communities. He serves as pastoral liaison for the Archabbey co-workers. In addition, he serves as a spiritual director and as a member of Abbey Caskets’ advisory board; he also assists with editorial review for CareNotes.